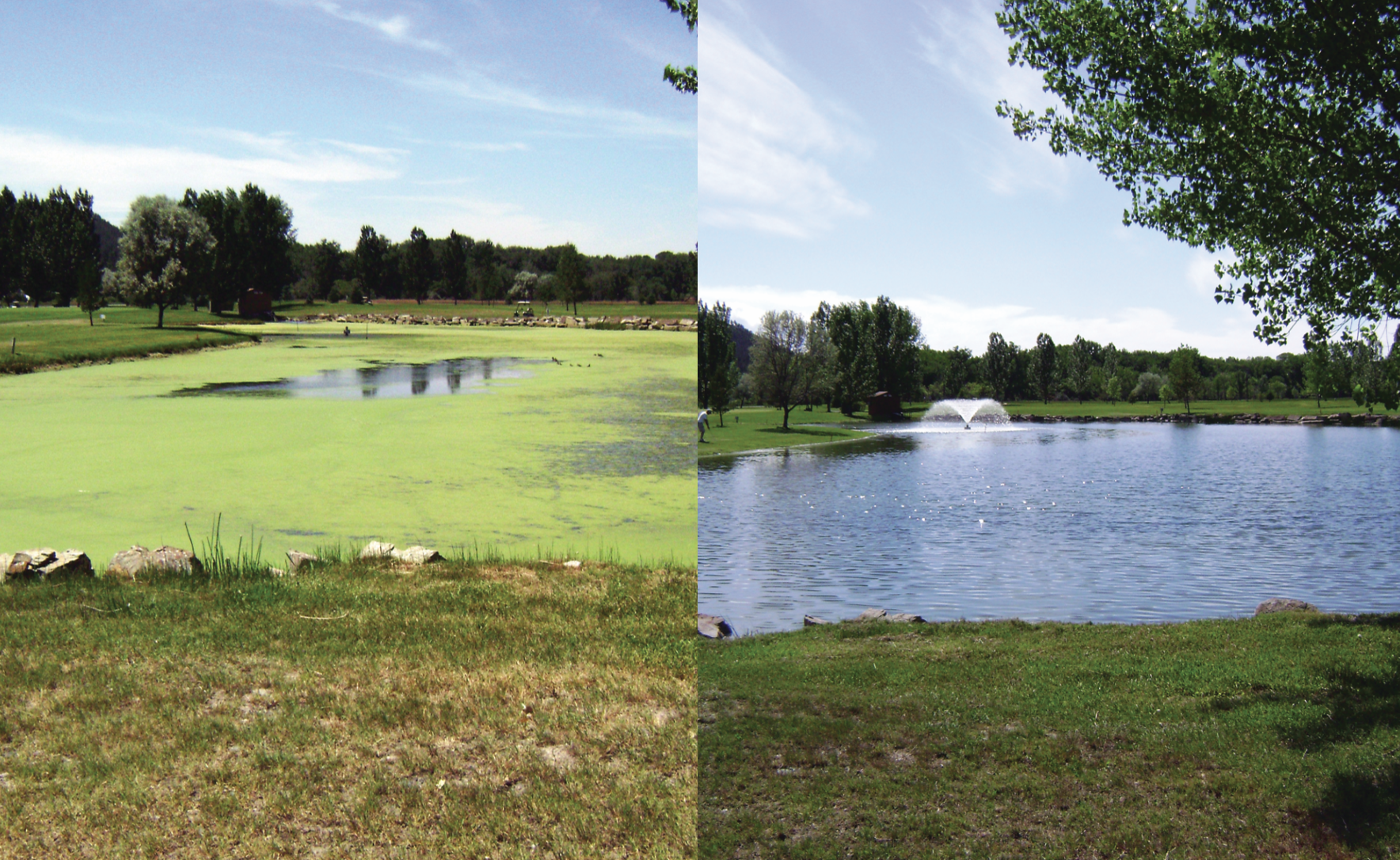 Bioaugmentation can be used to reduce organic substrate at the sediment water interface to reduce the magnitude of nutrient loads from solids accumulation.

The following case study describes the application of ProBiotic Scrubber® I (PBI) to reduce solids and nutrients in a freshwater pond.

A golf course and recreation center in Montana was having trouble maintaining water clarity in their one- and-a-half-acre freshwater pond during spring through fall.

The flows to the water body were introducing higher nutrient loadings. Half the water inputs to the pond were effluent from the town’s wastewater treatment plant; the other half was diverted from the Yellowstone River.

The water from the Yellowstone River was impaired by agricultural runoff that increased bioavailable nitrogen and phosphorus from fertilizers. In response to the above issue and the shallowness of the pond, algal and duckweed growth were excessive in the water body.

Subsequently, aeration via their water fountain and irrigation intakes were mechanically inhibited by the suspended biomass.

The management at the golf course needed to find a viable solution to shift algal and duckweed abundance in the pond.

BioLynceus® bioaugmentation was implemented in the freshwater pond to reduce the organic solids accumulation at the sediment water interface.

PBI was used to inoculate the system in April and additional doses were implemented twice weekly.

The treatment augmented the system with a highly diversified consortium of bacteria selected for enhanced solids decomposition and nutrient removal. Furthermore, a small amount of organic acid was implemented along with the PBI to promote heterotrophic bacterial metabolism.

Within the first few months of treatment, the water clarity in the outer edges of the pond improved.

Over time, solids reduction was observed from the outside edge towards the center of the pond.

The added bacteria first digested the organic matter around the banks of the pond which helped minimize sludge and related nutrients promoting duckweed and algae growth.

The bioaugmentation was working, but new management decided to halt treatment midway through the second treatment season.

The pond water clarity worsened without the treatment. The following spring, PBI was augmented in the system to gain the same results as the prior application.

For a second time, water clarity was improved by bioaugmentation.

Over the treatment period, lasting seven months (April to November), the algae and duckweed biomass in the pond decreased.

Over time, the clarity of the pond improved throughout the entire water column. BioLynceus® treatment helped digest organic material and improve water clarity in the freshwater pond.